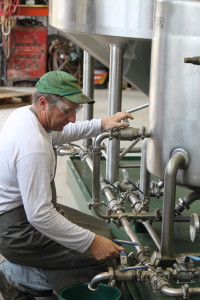 John and his family currently produce maple syrup, honey, sorghum syrup and hay for sale in local markets. Since 2004, State Line Farm has also experimented with sunflower, canola, mustard, and flax varieties in an effort to fuel their farm with biodiesel. END_OF_DOCUMENT_TOKEN_TO_BE_REPLACED Diversification of the farm had already begun in 1994 when the Scott family began raising emus (they are currently the largest and one of the oldest emu farms in Vermont, under the name Riverside Emus). With barns and pasture freed up after the dairy herd was sold, the Scott-Hewes took on raising Herefords and hogs and have been developing a local customer base for their beef, pork, and emu through on-farm and farmers’ market sales. END_OF_DOCUMENT_TOKEN_TO_BE_REPLACED The University of Vermont (UVM) now leases a number of acres from the Rainvilles as Borderview Farm has become one of the best-known applied research facilities in Vermont.  Roger, along with Dr. Heather Darby, a UVM Extension agronomist, and her team have helped transform the former dairy farm, conducting leading research in the Northeast on oilseed crops, perennial grasses, hops, small grains and other crops suitable for small-scale and value-added farming. END_OF_DOCUMENT_TOKEN_TO_BE_REPLACED